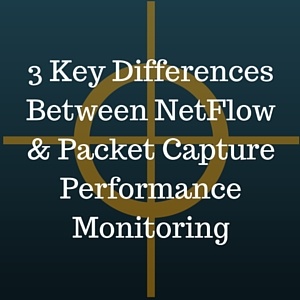 The increasing density, complexity and expanse of modern networking environments have fueled the ongoing debate around which network analysis and monitoring tools serve the needs of the modern engineer best – placing Packet Capture and NetFlow Analysis at center-stage of the conversation. Granted, both can be extremely valuable tools in ongoing efforts to maintain and optimize complex environments, but as an engineer, I tend to focus on solutions that give me the insights I need without too much cost on my resources, while complementing my team’s ability to maintain and optimize the environments we support.

So with this in mind, let’s take a look at how NetFlow, in the context of the highly-dense networks we find today, delivers three key requirements network teams rely on for reliable end-to-end performance monitoring of their environments.

Packet Capture, however rich in network metrics, requires sniffing devices and agents throughout the network, which invariably require some level of maintenance during their lifespan. In addition, the amount of space required to store and analyze packet data makes it an inefficient an inelegant method of monitoring or forensic analysis. Combine this with the levels of complexity networks can reach today, and overall cost and maintenance associated with packet sniffers can quickly become unfeasible. In the case of NetFlow, its wide vendor support across virtually the entire networking landscape makes almost every switch, router or firewall a NetFlow “ready” device. Devices’ built-in readiness to capture and export data-rich metrics makes it easy for engineers to deploy and utilize . Also, thanks to its popularity, NetFlow analyzers of varying feature-sets are available for network operations center (NOC) teams to gain full advantage of data-rich packet flows.

Striking the balance between detail and context

Considering how network-dependent and widespread applications have become in recent years, NetFlow’s ability to provide WAN-wide metrics in near real-time makes it a  suitable troubleshooting companion for engineers.   And with version 9 of NetFlow extending the wealth of information it collects via a template-based collection scheme, it strikes the balance between detail and high-level insight without placing too much demand on networking hardware – which is something that can’t be said for Packet Capture. Packet Capture tools, however, do what they do best, which is Deep Packet Inspection (DPI), which allows for the identification of aspects in the traffic hidden in the past to Netflow analyzers. But Netflow’s constant evolution alongside the networking landscape is seeing it used as a complement to solutions such as Cisco’s NBAR and other DPI solutions who have recognized that all they need to do is use flexible Netflow tools to reveal details at the packet level.

Context is a chief area where NetFlow beats out Packet Capture since it allows engineers to quickly locate root causes relating to performance by providing a more situational view of the environment, its data-flows, bottleneck-prone segments, application behavior, device sessions and so on. We could argue that packet sniffing is able to provide much of this information too, but it doesn’t give engineers the broader context around the information it presents, thus hamstringing IT teams from detecting performance anomalies that could be subscribed to a number of factors such as untimely system-wide application or operating system updates or a cross-link backup application pulling loads of data across the WAN during operational hours.

The short answer is, no. In fact, Packet Capture, when properly coupled with NetFlow, can make a very elegant solution. For example, using NetFlow to identify an attack profile or illicit traffic and then analyzing corresponding raw packets becomes an attractive solution. However, NetFlow strikes that perfect balance between detail and context and gives NOCs intelligent insights that reveals broader factors that can influence your network’s ability to perform. Gartner’s assertion that a balance of 80% NetFlow monitoring  coupled with 20% Packet Capture as the perfect combination of performance monitoring attests to NetFlow’s growing prominence as the monitoring tool of choice. And as it and its various iterations such sFlow, IPFIX and  others continue to expand the breadth of context it provides network engineers, that margin is set to increase in its favor as time.